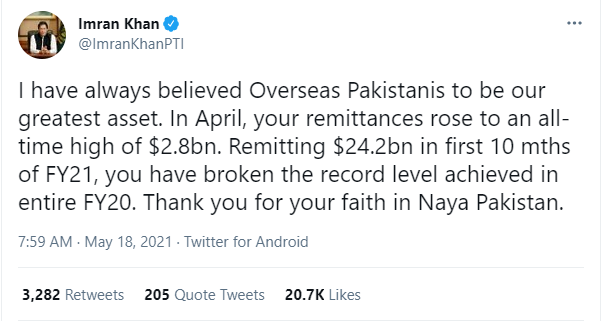 ISLAMABAD: The overseas remittances reached an all-time high of $2.8 billion in the month of April.

Prime Minister Imran Khan taking Twitter – a microblogging website, to laud the overseas Pakistanis, tweeting: “In April, your remittances rose to an all-time high of $2.8bn. Remitting $24.2bn in the first 10 months of FY21, you have broken the record level achieved in the entire FY20.” “Thank you for your faith in Naya Pakistan,” he further added.

The monthly remittances by the overseas Pakistanis reached an eight-month high at $2.72 billion in March 2021, becoming the tenth consecutive month where the remittances stayed above $2 billion.