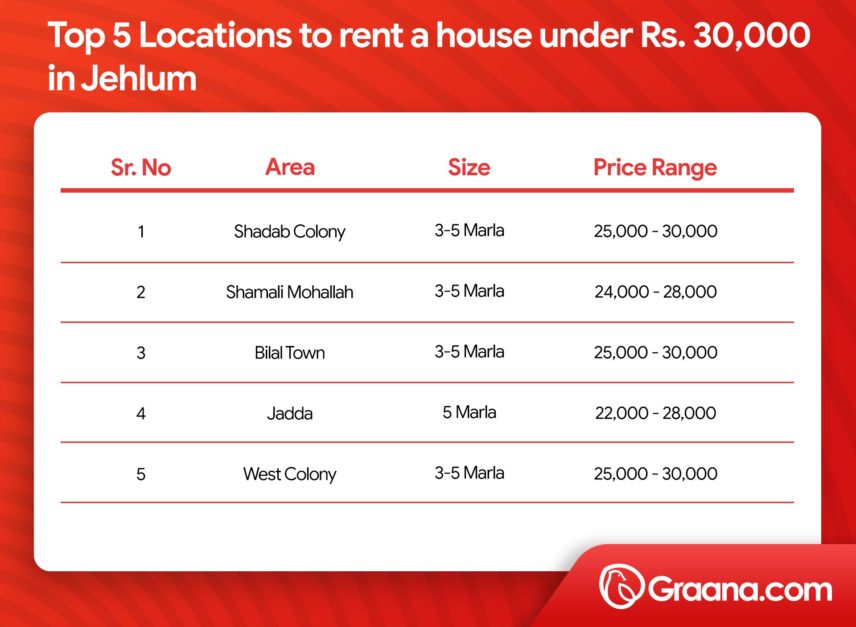 The city of Jhelum marks the end of the Potohar Plateau and it is situated beside the river Jhelum. The City of Jhelum is one of the prominent cities of Punjab and various attributes of geography can be easily traced in this region. The city can be easily accessed via GT Road and is renowned as a land of people with valour. Moreover, most of the people of Jhelum serve their country by joining the army therefore, most of the people in the city have a background in the military. The most renowned districts approximate to Jhelum include Islamabad, Rawalpindi, and Gujranwala. People of Jhelum in search of opportunities travel to the various parts of the country thus city also plays a great role in the development of Pakistan.

For the convenience of the people of Jhelum, Graana.com through this blog introduces ‘Top 5 Locations to Rent a House under 30k in Jhelum’. The city has almost a population of 190,425 which helps to infer that people look to buy, rent or sell properties.

The first area on the list where a house can be acquired under Rs30,000 is Shadab Colony. Shadab Colony can prove to be a suitable locality for those who are looking to acquire a house for rent near Jhelum River. Some of the prominent localities situated near Shadab Colony are Dhoke Abdullah, Naya Mohalla, and Pira Ghaib. The locality can be accessed via Civil Lines road.

The value of rent is given as

Some of the notable features of the area are as follow

The next area on the list is Shamali Mohallah which is situated next to Shadab Colony. The locality is also situated near the bank of river Jhelum and is among the prominent localities of the city. The locality can be accessed from Civil Lines road – one of the major commercial hub of the city. The notable localities of the area include Shadab Colony, Naya Mohalla Jhelum and Mistrian Mohalla.

The price credentials of the locality are given below

The rents in the locality are given below

Jadda is one of the renowned areas of the city and is popular for commercial activities. Jadda is also a famous bus stop on GT Road which and a lot of people commute from this point of the city. The locality can be easily accessed via GT road while passing through Mujahidabad.

The rent specification in the area is given as follows

Some of the major characteristics of the locality are given below

The last area on the list is West Colony which is situated adjacent to Jhelum Cantonment and can be easily accessed via Tufail Road. The areas approximate to West Colony include Doctor’s Colony and Main Cantonment. Similarly, Combined Military Hospital (CMH) is also approximate to the vicinity.

The specifications of the rent in West Colony are given below