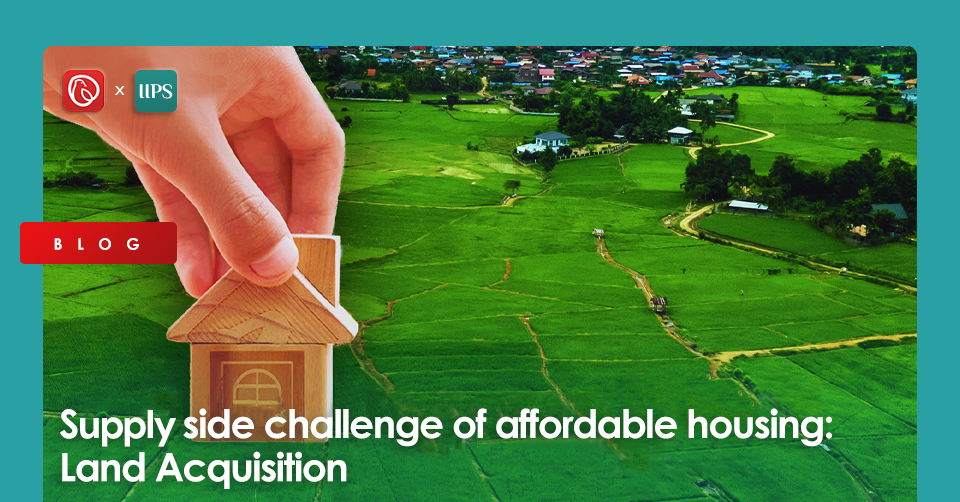 Land acquisition is perhaps the most important and complicated piece of the affordable housing puzzle. The process starts with confirming the ownership of land, carrying out a survey that defines the dimensions of the land to be acquired, determination of fair market value, and procurement through a transparent and fair process. In a country like Pakistan, where land records are poorly managed and lack transparency, it becomes increasingly difficult to ascertain the true ownership of any land. The demarcation of land is also a difficult process as the whole exercise depends on a single officer due to a lack of digital mapping. Determination of fair market value is mostly challenging due to a large amount of speculation in the real estate market. While a lack of regulation in price-setting means that most of the land is either overpriced or not worth its demanded value. All these aspects are considered the most basic supply-side challenges associated with providing affordable housing in urban centres.

Land acquisition can be stated as an action by the government whereby it acquires land from its owners to pursue a certain public purpose. Land acquisition can be against the will of the owners, but due compensation is paid. This distinguishes it from the outright purchase of land from the market. The three most common instruments used in land acquisition are land pooling, negotiated settlement, and formal acquisition. In the land pooling process, when private sector development is hindered by scattered and unsuitable allocation of land, an additional provision of infrastructure and services is needed. Landowners voluntarily sign ownership rights to a single agency or government body, which in turn develops the land by building basic infrastructures such as roads, sewage lines, electricity, and water connections. The agency then returns a small portion of land to the original owner, equivalent to the market value of the owner’s land before development. This process is the least cumbersome as it is voluntary and ensures the planned development of the land. But if the intent to pool land is leaked in the market, there is a high probability of the creation of cartels. Also, developing an infrastructure does not guarantee the development of land. Speculators may choose not to develop affordable housing at any stage of the process. (Archer, 1992)

A negotiated settlement is where a seller wants to sell a piece of land and is looking for financial compensation rather than retaining a stake in the land. The government will provide an opportunity to negotiate through market transactions rather than expropriation. In this way, the trading parties have to agree on a framework of assessment, negotiation, settlement, and implementation. The agency buying the land works towards an agreement after carefully assessing the land, loss valuation, and impacts of events such as flooding. Those affected by this agreement can demand higher compensation from the government instead of the price negotiated in the original deal. Then there is the instrument of formal acquisition. When voluntary methods and negotiated methods are no longer an option for landowners, access to land is deemed imperative for the local authorities. This entails compelling owners to sell their land or involuntary action, thereby displacing residents through enforcement. The agency compensates owners for their land, but if the compensation is too low, they are forcibly evicted. This method is usually costly and unpopular but provides compensation quickly at fixed market rates. (World Economic Forum, 2019)

Secure legal titles and property rights encourage investment in land and also improve access to infrastructure. However, attempts to convert informal settlements into land titles can risk widening the inequality by favouring groups with better access to information. Therefore, another approach could be to emphasize rights rather than titles to preventive measures such as forced evictions and relocations. Following this method, the government can ensure the poor living in informal settlements to loan out their lands for making two to three-story homes whereby one story would be given to the right owner and the other will be sold at market value to cover some part of the cost. Public land ownership also holds the key to affordability in cities where middle- and lower-income families are unable to compete with corporate investors, but community[1]housing providers and city governments could collectively purchase or repurchase large quantities of housing stock. (Brandt, 2009)