Here’s some good news. The federal government has announced putting aside Rs30 billion as subsidy for Naya Pakistan Housing Program (NPHP). This will certainly get the ball rolling on the laudable housing project, but there are still some concerns that need to addressed.

Globally, when a government wants to support the housing industry and fill the demand-supply gap, it either launches a large scale public housing project by footing the entirety of the bill, or by bringing the private sector on board by provide a facilitating environment through fiscal support and regulatory interventions. In both cases, the ultimate aim is to make the projects commercially viable and financially less burdensome for the government and consumers.

In that context, besides regulation, another major challenge that the project faces is making it affordable for end-consumers, while at the same time making it commercially viable for builders and reducing fiscal pressures on the government’s already tight budget, especially since the commitment for a substantial subsidy has been made. This is where cost of construction comes in.

Undoubtedly, land costs take up the bulk share in the total cost of housing. In Pakistan, property prices have typically moved upward in triple digits over the past few years, but cost of construction is not too far off. 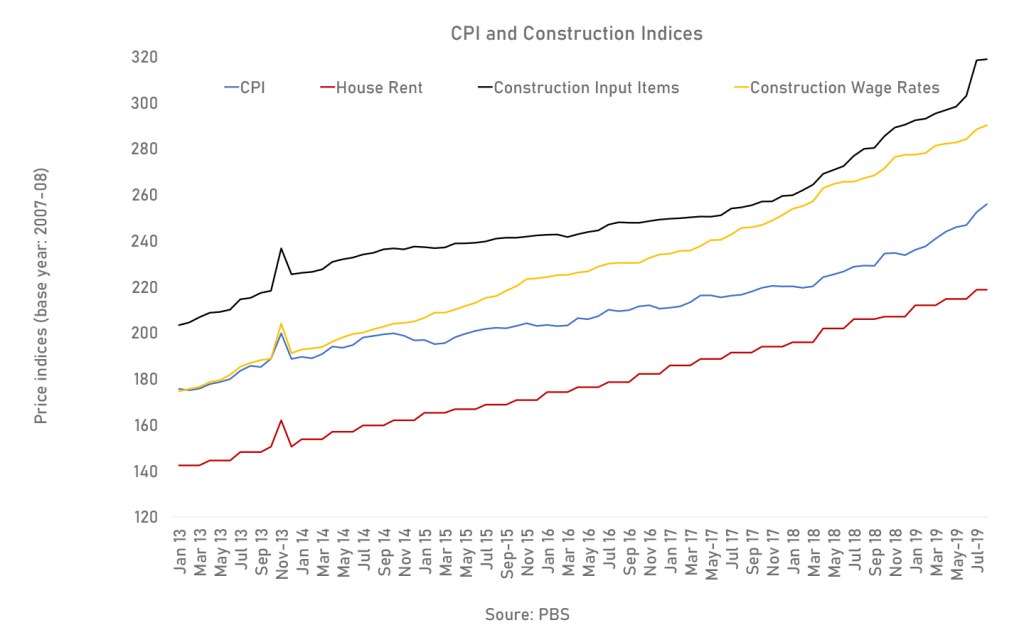 Obviously, this means that constructing houses will cost developers more. Part of the reason for the greater inflation in building materials is higher taxes on commodities like cement, and the overall cost of doing business going up (increase in electricity and fuel prices) for the majority of manufacturers. Rupee devaluation has also caused costs of production to increase, given many commodities and inputs used in manufacturing come through imports, which as a consequence has translated to higher market prices.

However, looking at cement, prices have not increased too much, which is predominantly because demand for cement has been declining over the past several months. Manufacturers have been hard pressed to control retention prices. But a sudden increase in demand, which will no doubt come in when NPHP projects kick off, cement (and other building material) manufacturers will try to make up for the loss in margins in the past quarters by raising prices. Essentially, construction costs are set to go up.

And there is not much the government can do here. If it were to reduce taxes, the reduced tax may lead prices down but will cost the national exchequer much needed tax rupees. If this tax is the federal excise duty (FED) on cement, which was increased in the last budget, it would certainly put a dent to the kitty since cement is the biggest contributor to FED in Pakistan, second only to tobacco.

The best hope yet is that as the economy comes out of its stabilization phase into the much-needed reform and growth phase, inflationary pressures will naturally diminish. In the meantime, the government can lend focus to other important aspects of affordability and in fact, be laser set on improving the regulatory and legislative environment for real estate development—which is what will pay dividends moving forward.

What Color Should You Paint Your Room ?

Landscape Architecture Is More Important Than You Think

Advantages Of Natural Ventilation Systems In Homes And Buildings

Tips To Manage Structural Renovation In Your House

Uses Of Granite In House Construction

TYOES OF DOORS USED IN PAKISTAN

Tips to Integrate your modern house with nature.

All You Need To Know About Construction Materials Used in Pakistan

7 Essential Considerations When Building Your Own Home

Most Common Construction Styles for Houses in Pakistan

Fascinating Ways to Use Glass to Decorate Your Home

Wooden or Aluminium—Which Window is Best and Why?

How to Select an Architect to Design Your Home?

Common Home Renovation Mistakes and How to Avoid Them

How to Check the Quality of Cement before Construction

What is the Purpose of Plinth in Architecture?

How to Choose the Perfect Aquarium for Your Home

How to Manage Structural Renovation in Your House?

How to Decorate the Empty Space Above Your Bed

Factors to Consider when Renovating Your Kitchen

Experience Apartment Living in All Its Exclusivity at Pakistan Pride, Lahore

Reasons Why You Should Consider Investing in Apartments

A Short Comparison of Fly Ash Bricks and Clay Bricks

All You Need To Know About Industrial Construction